Lê Lợi became the emperor and the kingdom was named Đại Việt (Great Viet) again, with its capital in Thăng Long. The Posterior Lê, the most long-lasting dynasty in our national history, was established, experiencing the largest number of upheavals. The Lê adopted Confucianism as its orthodox ideology to govern the kingdom, so that Buddhism and Taoism were constrained much more than they had been in previous dynasties. Confucian royal examinations were frequently organized to select talents for the Court.

The most famous emperor of the Posterior Lê Dynasty was Lê Thánh Tông who ruled from 1460 to 1497 under the reigns of Quang Thuận and Hồng Đức. It was during his reign that Vietnam’s feudalism reached its peak. Agriculture received great prominence from the Court. Social order was maintained thanks to the Hồng Đức Code – the most perfect and progressive law in the history of feudalism in Vietnam. Emperor Lê Thánh Tông expanded territories to the south and confirmed the kingdom’s sovereignty through publishing an atlas titled after his royal reign Hồng Đức thiên hạ bản đồ. 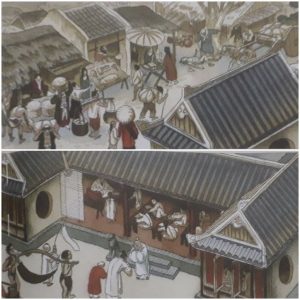 A literature using Chinese script dominated. However, the literature in Nôm (a Chinese script-based writing system created by Vietnamese scholars to transcribe Vietnamese vocabulary) flourished. Emperor Lê Thánh Tông  and Nguyễn Trãi were among authors having many works written in Nôm. Quốc âm thi tập by Nguyễn Trãi and Hồng Đức Quốc âm thi tập by Lê Thánh Tông were two among the oldest Nôm-script poem collections which have been preserved until now.

Đại Việt sử kí toàn thư (Full Collection of the Great Viet Kingdom’s History) by 15th century historian Ngô Sĩ Liên was a set of book about Vietnam’s history from the era of Hùng Kings to the Posterior Lê Dynasty. These are the oldest historical books which are still passed down today. Achievements were made in other scientific fields, such as medicine and maths. Scholar Lương Thế Vinh (1441-1496) gathered mathematical knowledge to compose the book Đại thành toán pháp.

Continue your reading with chapter 11.