Under the reign of King Lê Long Đĩnh, the Anterior Lê Dynasty fell into decadence. Lý Công Uẩn (974-1028), a talented general, was enthroned by the Court and army, establishing the Lý Dynasty in 1009. Lý Công Uẩn became Emperor Lý Thái Tổ. One year after his accession to the throne, he ordered the transfer of the capital from Hoa Lư to Đại La (present-day Hà Nội). This decision showed the strategic view of an excellent ruler and marked an important turning point in the national history…

In autumn 1010, a royal convoy started from Hoàng Long River, following the Đáy and Châu (also Phủ Lý) Rivers, and moored at Đại La Citadel. Standing at the citadel’s foot, the Emperor saw a rising dragon-shaped cloud and renamed the citadel Thăng Long (Ascending Dragon). The new name recalled the nation’s origins of fairy-dragon while showing the kingdom’s ascension. For the first time, the Việt people established their imperial capital in a large plain, without forests and mountains as protective layers.

The legend has it that, supported by gods, Lý Thái Tổ built the citadel foundation along the footmarks left by a white holy horse, thus erecting a high and solid Thăng Long Citadel. To express his gratitude to the God, the Emperor built the Bạch Mã (White Horse) Temple which is considered one of four tutelary temples of Thăng Long, namely Bạch Mã in the East, Voi Phục in the West, Kim Liên in the South and Trấn Vũ in the North. In 1054, his successor, Emperor Lý Thánh Tông (1032-1072) renamed the kingdom Đại Việt (Great Viet). The Lý Dynasty brought the Đại Việt culture into a development of over consecutive 200 years (1009-1225).

By then, internal and external trade quite developed. Markets mushroomed in every villages, wards and streets. In Thăng Long Imperial Citadel, there existed many busy markets like Tây Nhai (present-day Ngọc Hà Market) and Cửa Đông (a part of Đồng Xuân Market nowadays). In 1149, Emperor Lý Anh Tông (1136-1175) allowed the construction of Vân Đồn trading port (in Quảng Ninh Province) – the first of its kind in Vietnam, attracting foreign merchant ships and making the business thriving for centuries. 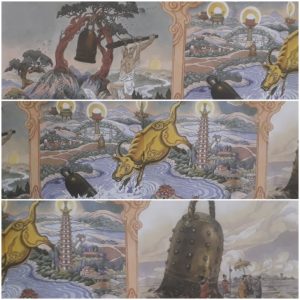 Confucianism began to prosper since the the Lý Dynasty. In 1070, Emperor Lý Thánh Tông had the Temple of Literature built to honor Zhou Gong, Confucius and his four best disciples (Yanhui,Zengshen, Zisi and Mencius), and 72 most honored Confucian scholars. Vietnam’s system of mandarin examinations started in 1075 when the first competitions were held. Lê Văn Thịnh (1050-?) became the first-ever doctoral laureate in the Vietnamese history and later a top-ranking courtier.

Pagodas were built everywhere. In 1080, Emperor Lý Nhân Tông (1066-1127) cast “Giác thế chung” (People-awakening bell), consuming 12,000 kilos of bronze. However the bell was too heavy to be hung on. Thus, the Emperor ordered the bell placed in a ricefield plot where there were a lot of tortoises behind the Diên Hựu (One-pillar) Pagoda. So, the bell was also  called Quy Điền (Tortoise Ricefield). 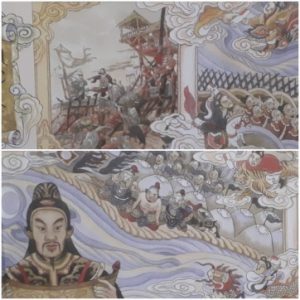 The victorious resistance war against the Chinese Song invaders in 1075-1077 helped heighten Đại Việt’s position. General Lý Thường Kiệt (1019-1105) and his poem Nam quốc sơn hà (Mountains and Rivers of the Great Viet), the first declaration of independence, went down in history. After the victory, the name Lý Thường Kiệt became a terror to the Chinese feudal court. For the following 200 years, the Song Dynasty dared not to send their troops to Vietnam. 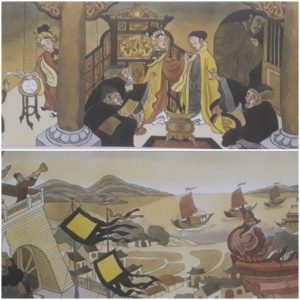 At the end of the Lý Dynasty, state affairs were depraved. Lý Huệ Tông (1194-1226) was a week emperor, both physically and mentally. In the court, the Trần family became very powerful. This historical period witnessed an unprecedented case of changing kings. Having no son, Lý Huệ Tông had to cade the throne to his eight-year-old daughter Chiêu Thánh who became Empress Lý Chiêu Hoàng (1218-1278). Trần Thủ Độ (1194-1264), a senior courtier, cleverly arranged a marriage between his seven-year-old nephew, Trần Cảnh and Empress. Soon after, the Trần family publicly announced: Empress Lý Chiêu Hoàng transferred the throne to her husband. Consequently, Trần Cảnh was crowned as Emperor Trần Thái Tông without making the masses discontented.

The Trần Dynasty ruled our country for 175 years (1225-1400), of which the first 70 years from the reign of Emperor Thái Tông to the reign of Emperor Nhân Tông were extremely prosperous. The Trần Court considered agriculture and fishery as economic foundations. Many significant cultural and educational achievements were made. Confucianism was dignified. Nôm scipt was introduced and the Việt people had their own writing system.