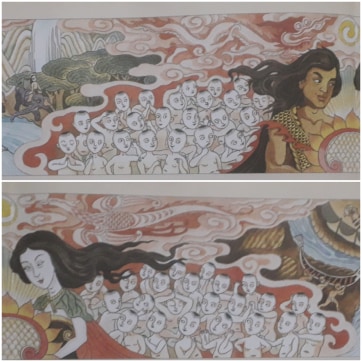 Our nation’s history begins with legends…

According to legend, the country of Vietnam starts in 2879 BC, when Kinh Dương Vương became the king of Xích Quỷ. The territory of Xích Qủy expanded to Dongting Lake (now Human Province China) in the North, Hồ Tôn (the coastal land strip in present-day Central Vietnam) in the South, Bushu (Sichuan, China) in the West, and Eastern. Kinh Dương Vương married a daughter of the Kinh of Dongting Lake and they had a son, name Sùng Lãm, who later succeeded his father to the throne, as Lạc Long Quân.

Lạc Long Quân got married to Âu Cơ, a fairy from Vụ Tiên Mountain. Âu Cơ bore a womb of 100 eggs that hatched out 100 sons. However, Lạc Long Quân was a dragon living under water while Âu Cơ was a fairy living on the mountain; it is hard for them to remain together forever. Thus, Lạc Long Quân took 50 of their sons to coastal regions, while the 50 others followed their mother to the mountains. They established villages and became ancestors of the Việt People. The oldest among Âu Cơ’s followers was elevated to the status of king, called First Hùng Kinh. 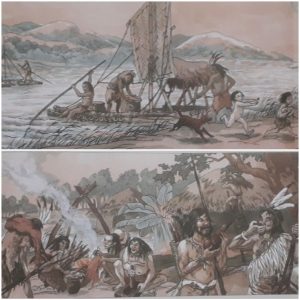 According to archaeological discoveries, about several thousand years ago, from caves in Mount Đọ of Thanh Hóa Province and Bình Gia of Lạng Sơn Province, ancestors of the Việt people moved to and explored the deltas of such rivers as Hồng, Mã, and Cả. With their skillfulness, intelligence and creativity, they domesticated wild plants into crops and replaced roughly-chipped stone tools with metal ones. A new civilization was budding.

Around 700 BC, the ancient Việt people entered the Đông Sơn Culture during which they research the technical and artistic peaks in casting bronze products, such as Đông Sơn bronze drums. Besides, they started to use iron tools. That flourishing culture and civilization helped to lay the foundations for the debut of an early state in the Red River Delta – the State of Hùng Kings. 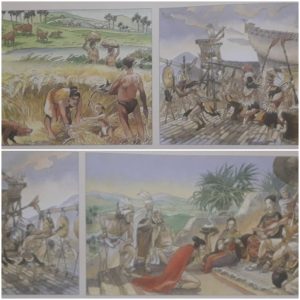 The Hùng Kings named their country Văn Lang and established the capital in Phong Châu (present-day Phú Thọ Province). The Kings’ sons were called lang, đạo while daughters mệ nàng or mị nương. The Hùng Kings ruled through lạc hầu (civilian chiefs), lạc tướng (military chiefs). Civilians were called lạc dân. The embryonic division between the rich and the poor started to be seen at villages and in the country.

Việt civilians were good-natured and simple-hearted cultivators who grew crops in their village’s rice-fields. Ordinary rice gradually replaced glutinous rice as the main cereal. Using products gathered from those fields, the Việt people made such simple cakes as chưng and dày which are still prepared during the Tết holiday until now. Various customs and ways of life of the Việt people were formed during this period.

For the introduction click here. Chapter two this way.